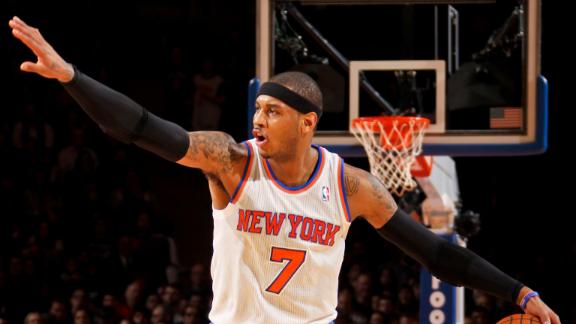 As part of NBA All-Star 2015, the NBA and its partners will host a variety of community, grassroots and fan events throughout the city’s five boroughs (The Bronx, Brooklyn, Manhattan, Queens and Staten Island). This will mark the fifth time that NBA All-Star will take place in New York, having been held previously at Madison Square Garden in 1954, 1955, 1968 and 1998.

“New York offers an extraordinary opportunity to host NBA All-Star events at two world-class venues,” said Stern. “We look forward to celebrating our game with basketball fans across the entire city, in all five boroughs.”

“New York City is the basketball capital of the world and the sport’s biggest stage,” said Mayor Bloomberg. “We’re lucky enough to have two world-class arenas, and the only thing better than having All-Star weekend at Madison Square Garden or the Barclays Center is having it at both of them. The weekend’s activities mean tens of thousands of visitors to the City and lots of activity for local businesses, plus a week of community service events around the five boroughs led by the NBA, which has a terrific record of giving back. We’re thrilled and looking forward to cheering on the stars.”

“We are honored to host the greatest players in the NBA in the newly transformed World’s Most Famous Arena for the 2015 All-Star Game,” said Dolan. “Over its 134-year history, Madison Square Garden has been privileged to host some of sports most defining and enduring moments and we are thrilled to add this prestigious event to The Garden’s illustrious history. We look forward to working with the City of New York, the NBA and the Brooklyn Nets to make the event a celebration of basketball for all New Yorkers to enjoy.”

“We are thrilled to welcome the 2015 NBA All-Star festivities on Friday and Saturday to Barclays Center,” said Brooklyn Nets owner Mikhail Prokhorov. “Brooklyn has produced some of the greatest players in NBA history, so it’s fitting to hold All-Star events in the ‘Borough of Basketball.’ We are looking forward to showing fans and the players a memorable experience in our state-of-the-art venue, and we are also excited to bring the All-Star Game to Barclays Center in the very near future.”

“Barclays Center is proud to welcome such an exciting event as All-Star ’15 and to continue bringing the best to Brooklyn,” said Bruce C. Ratner. “We are delighted to join with New York City, the NBA and Madison Square Garden for a wonderful weekend. Basketball may have been invented in Springfield, Mass., but its heart and soul are in NYC through and through.”

“Madison Square Garden has been a celebrated center of New York since it first opened its doors in 1879. This fall, with the completion of our three-year Transformation, The World’s Most Famous Arena will also become the world’s most state-of-the-art arena,” said Hank Ratner. “2015 will mark our fifth time hosting the All-Star Game, and we look forward to providing yet another unforgettable experience for the great basketball fans of New York.”

NBA All-Star is an event with deep roots in New York City, reaching back to the 1954 game (the fourth NBA All-Star Game overall), where the Madison Square Garden faithful saw the Celtics’ Bob Cousy tally10 points in overtime en route to MVP honors as the East recorded a 98-93 win over the West. Boston had a second consecutive All-Star Game MVP in 1955 as Bill Sharman scored 10 of his 15 points in the fourth quarter of the East’s 100-91 win over the West in the second NBA All-Star Game played at Madison Square Garden. Philadelphia’s Hal Greer shot 8-of-8 from the floor and notched 21 points during the third NBA All-Star Game played in New York City, a 144-124 East win in 1968. In 1998, the most recent contest in New York, Michael Jordan garnered MVP honors as he scored 23 points and added eight assists and six rebounds during a 135-114 victory for the East.

The NBA will continue to demonstrate its commitment to social responsibility during NBA All-Star 2015 with a full schedule of NBA Cares events. NBA Cares will partner with schools, government and local nonprofit organizations in New York and surrounding areas to highlight the league’s grassroots and community initiatives that reach millions of young people and their parents, while providing critical resources to community-based programs.